Digital Out-of-Home is more than the hardware. It is too simplistic to consider the use of a LED screen or LCD screen as Digital Out of Home. While Augmented Reality (AR) and Quick Response (QR) codes have created an interface for some interactivity, I do not see them as true convergence of the Digital and Out-of-Home media.

One of my favourite applications of AR is the Hugo Boss’ Black Magic store promotion in London for Christmas 2009. As for QR codes application, my favourite applications is the Emart’s Shadow-Activated QR Code. The QR code was scannable only in the middle of the day which is the targeted time for the Emart as it is the worst performing time for Emart. To quote David Griner, www.adweek.com , it is a “great example of a marketer finding a way to turn QR codes into something actually worth scanning.”

Near Field Communications (NFC) enabled communications’ applications in advertising is also on the verge of becoming mainstream. Both the Wired magazine and JCDecauxhave completed their NFC trials on their own media platform. NFC rides on the proliferation of smart phones amongst the general public. As shared by my colleague Daniel – that the Singapore government has launched out plans to make NFC readily available, however this trend could take a bit more incubation as NFC requires both the smart phones and its SIM card be NFC ready. 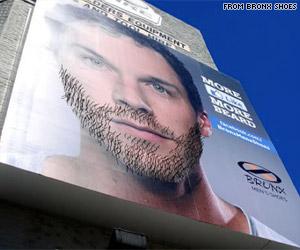 Succinctly summarised by Jonathan Anker on this article Things get hairy on South African billboard.

[The Bronx Shoes campaign is essentially an] interactive beard-board featuring remote-controlled strands of hair that grow with each Facebook ‘Like’.

We can now officially do anything just by sitting in front of a computer — including making some giant dude’s beard grow on a billboard halfway around the world.” How it works: Well, it’s little old-school, a little new-school — specifically, pulleys n’ rope and computer servers. There are more than 600 strands of “hair” (rope, actually) on the Cape Town, South Africa, beard-board and about three inches are rolled out by pulley each time a new “Like” is detected by a computer inside the ad. The billboard is about two stories tall, so the journey from stubble to lumberjack (like, real lumberjack, not urban lumberjack) may take a little while at just three inches per strand, per like.

Still, you can watch the beard fill-out in real time courtesy of this live stream of the billboard. It’s pretty exciting stuff … for anyone who’s ever found watching paint dry a bit too action-packed. 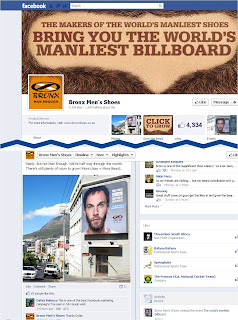 The company’s Facebook app is here. And the token reward has been won by the person who “grows” the beard and shares the page with the most people, by the end of April. She will receive six free pairs of shoes from Bronx Shoes. 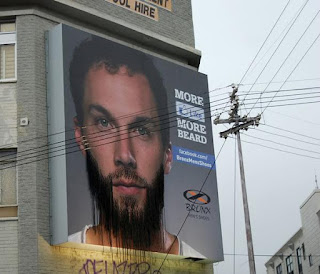 Quite old-school, quite new-school but more so, it allows the Digital and the physical Out-of-Home have a direct effect on the other. Quite thought-provoking.

How a safety signage is an investment for your company