The LED technology has recently stabilized at a new high, further boosting the proliferation of LED billboards into the outdoor media landscape. Once upon a time, LED screens, or also known as e-boards or digital outdoor displays, were considered premium and rare products, but now they are considered a mainstream outdoor media format.

Louis M. Brill provides more details in an article with the SIGNINDUSTRY.COM – LED Billboards: Outdoor Advertising in the Video Age. He has also mapped the application of LED billboards into 3 specifics – spectaculars, roadside displays and LED billboards as multiple signs into a network system. Tulip Mega Media, based out of Shanghai, China has done just that with a current operation of LED large screens with a combined area of more than 10,000 square meters in big cities like Beijing, Shanghai, and Guangzhou as cited here.

LED technology has also stablized whereby we are able to explore its lighting capabilities to enhance our displays. Yet, I personally stand-by the view that neon lighting remains an incredible art form and allows for a much wider range of color shades. Neon lighting is also the brightest form of advertising lighting… 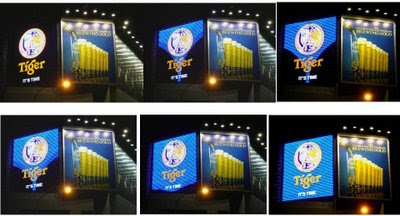 This is one of our former landmark sign for Tiger Beer at the start of Chinatown, Singapore. It is also the largest animated neon in Singapore between 2003-2007. It was a very beautiful and powerful strong visual impact.

But TPM has been tinkered around with LED lighting since 2004, and we have harnessed its low power consumption for use in combination with a frontlit banner display as currently seen at the Furama City Center Hotel for Konica Minolta Copiers. The corporate logo and company name is reproduced in LED format adding extra brightness and shine for the night scene. Good visual impact, highly cost effective and environmentally friendly! 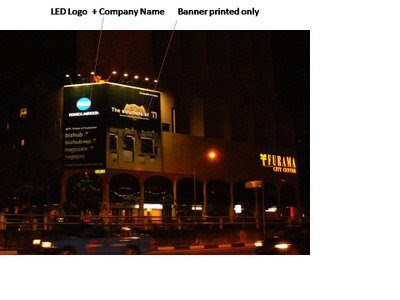 Amaze by Instarem Branding with Digital Displays Network in Singapore

Branding Strategy with OOH Advertising to Local Communities in Singapore